My father always told me that time passes quickly as you get older. But mid-August. Really? The last two months have been a blur of washing chlorine-soaked wet towels and sweeping up gritty sand trekked in from park and beach outings. But I am not complaining. There was a period this season when time could not move fast enough.

It started out with what seemed like a great idea: sending our kids to the East Coast to spend a few weeks with the grandparents. I envisioned hubby and I eating out in restaurants that don’t have booth seating or pictures of food on the menus; watching movies with lots of curse words, violence, and nudity; having late-night drinks at some chic L.A. bar; and in between all of that reading a few books and sleeping in. But in reality, while I attempted to live out that fantasy, my chest felt hollow. I could hardly concentrate on work, and I kept finding myself in my kids’ room touching their things. I really was PATHETIC!

Before I dropped off my girls and hopped back on a plane to Cali, I got to watch both of them create some summer memories very close to my own. At night, they filled up jars with lightning bugs and roasted marshmallows with their cousins. Their sweet, juicy skin swelled from the bites of mosquitoes. And at midday, they giggled as they ran under a hose or through the Slip ‘N Slide to cool down from the summer heat.

The funny part was witnessing the 2012 spin to it all. My girls had bikes to ride, just like I did, but instead of riding all over the neighborhood, they were only allowed to go up and down the length of the driveway. And instead of running between the garages and through the neighbors’ backyards, they ran in circles on patches of grass under a watchful eye.

Though times have changed, the joy of seeing my kids bond with their cousins, grandparents, and great-grandparents is timeless. So I am up for the separation anxiety (on my part) next summer. I’ll endure the days of wondering what my children are doing or the fear of something happening to them. I will try to remember that I have left them in safe hands (my parents). I know time flies, and I want my daughters to enjoy every minute of it. 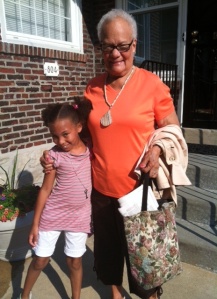 I hope you and your children are having a wonderful summer, too.