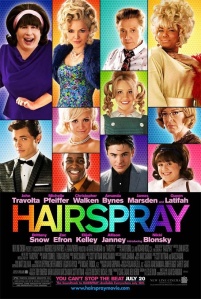 Just putting it all out there because it has been a while since I blogged. In fact, I started writing this entry in January, and I just sat my butt down to finish it. And, yes, your calendar is correct … it’s the beginning of June!

My two little girls, Ms. Prissy and Chickenhawk, have been keeping me busy with pneumonia, school trips, and runny noses. But their new obsession, watching the musical Hairspray, requires a lot less work on my part! They love the latest remake, with John Travolta, Queen Latifah, and Michelle Pfeiffer. Since Mother’s Day, I’ve been forced to watch it morning, noon, and night.

As soon as we pop in the DVD, my 3-year-old falls into that frozen mannequin trance that only the TV can induce. And now both of my girls are not only singing the songs but doing the dance routines as well. But the most intriguing part has been the conversations the movie has inspired in our household, prompted primarily by my 5-year-old.

First, she asked me about the main character’s plump size. “Is she big throughout the whole movie?” she inquired innocently. I thought it was an odd question, but then it dawned on me that my daughter probably never sees larger-sized women on television, especially as a lead character.  I told her, “It is like my book, Same Difference. We come in all different sizes and complexions. No one is better or worse.”

Another time, while huffing and puffing from attempting to dance in unison with the movie, she flooded me with, “What is segregation? Why were blacks and whites separated? When did it end? And how did it change?”I was totally unprepared to answer an onslaught of questions about race from my child. I thought I had a few more years left before we had to have these kinds of conversations! So as simply as I could, I started to explain. I told her that segregation was a law that said black and white people could not live near each other, that they could not go to the same schools, sit together on buses, or in movie theaters. And even if a white person and black person loved each other, they could not hold hands or even walk down the street together.

After I finished, my oldest daughter looked at me in earnest and said, “I am glad the laws in America changed, Mom, because now you can go outside with Daddy and not be scared.” A bit stunned by the realization that my daughter thought I was white, I said, “No, baby. I am black and Daddy is black, too. Segregation would not affect us because we are the same race.” She responded, quite confidently, “No, Mom, you are white. Me, my sister, and Daddy are black.” Again, I attempted to explain “No. I am just a very light-skinned black woman.”

But I could see in my daughter’s eyes that she was not buying it one bit. She stopped dancing, walked over to me, and patted me on the shoulder and said, “It’s okay, Mom. It’s just like your book, Same Difference,” then went back to dancing. I guess in her own little way, she was telling me that race really didn’t matter. White, black—we’re all the same. All I could do was smile. And although our conversation will undoubtedly continue, she was right. We are all the same. No one is better or worse.